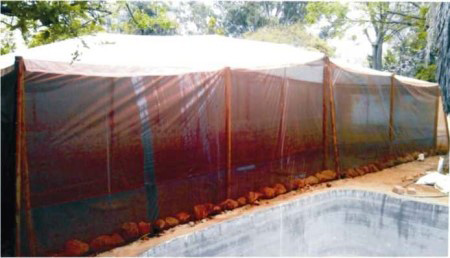 This Butterfly Breeding Centre was built by its owner Aiden Lottering with the assistance and help of the South African Butterfly breeding Association (SABBA) in 2011. Measuring 12m (L) x 4m (W) and 2.4m (H), in the heart of Pretoria. After planting in his host plants and introducing his gravid females, he has been doing extremely well. Here’s what he had to say. “I received breeding stock (Charaxes varanes) from (SABBA) in the form of several pupae, larvae and already pupated butterflies, as well as the necessary stock of the host plants. To have seen these larvae for the first time, was remarkable. Their little horns and elongated bodies, reminded me of Chinese Dragons. They travelled all the way from the South Coast up to the Drakensberg first and then on to Gauteng. Earle gave some good advice on how to keep them cool during the journey and they all arrived safe and happy in Pretoria. I released the pupated butterflies into my Lepidome and I must admit, it was a great feeling to see so many of them finally starting their life cycle in there and I wondered if they would breed. Lizanne assured me that if they have food and their host plants nearby, they would definitely do so. After about three days of visiting and working in the Lepidome, I noticed a female fluttering about one of the little Dune Currant trees and to my delight, she laid an egg. What a nice thing to witness, the precision is remarkable. During the course of the following days I just noticed more and more eggs, some were on top of the leaves and some even on the stems of the host plant, but most were glued to the bottom of the leaves. The eggs started out with a nice yellowish color and then turned green-brown and as the caterpillars started forming, turned brown completely. Within about 8 days I started noticing the new little caterpillars on the plants and of course new eggs. Lizanne advised me to be careful and make sure that there were no unwanted ‘guests’ in the Lepidome. It is an awesome feeling to start a little ‘nursery’ with the newly hatched caterpillars. We are really blessed to be part of this cycle and to witness it so up close and personal.” Since then Aiden has been breeding his butterflies non stop from 2011 to 2013. It is unfortunate that he had to close his breeding centre to move premises within 2013. 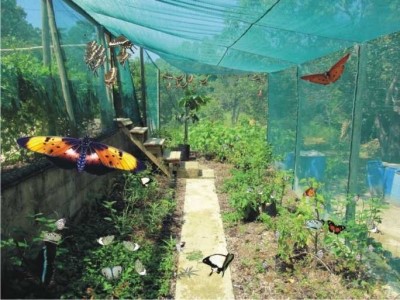 Another Butterfly Breeding Centre that is doing extremely well is the is the one set up in Ramsgate of KZN. Here 48 different local species have been bred in one seasonal brood at its highest peak. But on average there is between 8 and 16 butterfly species being bred throughout the year. The lepidome measures a mere17m (L) x 4m (W) and 2.8m (H). This lepidome was set up in 2012 and is the replacement lepidome for a smaller one built in 2010 measuring 3m (L) x 3m (W) x 2.4m (H) which was housed on private property in the heart of Ramsgate. It was the breeding successes from this lepidome that led to the construction of a larger one in 2012. This lepidome produces a total of approximately on average 680 butterflies per month. Most of these butterfly species being bred here are bred without any interferences from the breeder, for the exception of adding new host plants from time to time.