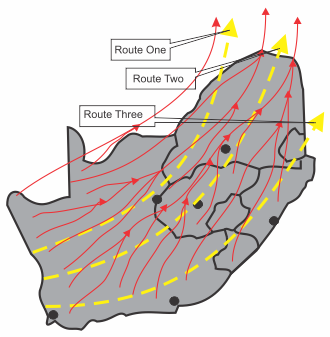 The first migration flight path is from Namaqua National Park and surrounding areas through to Augrabee Falls National Park, all the way to Barkley West with its rich grassland and small forested areas, through to the Magaliesburg Nature Reserve areas. It then continues through into the Kruger national park, through the Ponte districts of Mozambique and into the sea in the direction of Madagascar and further north into Africa.

Yellow shows the main general flight paths taken by the majority of the migratory butterflies.

Red shows the smaller but general flight paths taken by many thousands of migratory butterflies.

The third main migration flight path begins in and around the Ado Elephant Park, through Eastern Cape along the Lusikisiki mountains. It then heads east towards the sea and up northwards through KZN, while others head towards the Drakensberg Mountains and nature reserves, then outwards to the eastern coast, through to the Magaliesburg Nature Reserve areas, continuing through into the Kruger National Park, through the Ponte districts of Mozambique and into the sea in the direction of Madagascar and further north into Africa.

This does not mean to say that these are the only migratory butterfly flight paths that exist. There are many smaller ones coinciding with the main ones described above. Remember, butterflies know no boundaries.

In these migration flight paths, many females copulate with the males and thereafter as they continue their flight, the females begin to lay eggs en-route. This will allow the next generation of butterflies to begin a new migration at a later date. As these butterflies die off during the flight, others join the migration, forming a continuous rhythm of butterflies dying off and other specimens joining in the flight of the migration.

Some of the freeways are just wind passages caused by hot upraising air drafts and cooler airways causing air flow passages, like a vortex in which many migratory butterflies are caught up in and have been reported to be found up to a kilometre in the air, while others have been reported to be sighted by passing cargo ships, sometimes 120 km off the South African coast line in the Indian Ocean.

It is also encouraging to see just how many people have become interested in our South African butterfly migration. In 2014, we had many people telephoning us from all over South Africa. A number of reports of sightings from the Gauteng province, Botswana and the Free State Province have shown concern to the observers who reported the migration going the wrong way. They are heading south. While other observations have been made from the Eastern Cape, that the migration is headed north. In the Western Cape the migration is headed in a North-easterly direction. These sightings are in actual fact not confusing but rather the butterflies using these flight paths to join up into the main ones.

The migration is usually from mid November to mid February – not meaning that the migration starts in mid November and ends in February – but rather that it can take place anytime in this depicted space of time. It has been recorded on several year patterns as being as late as March to April.
What sets the migration off is the combination of prevailing weather conditions and the need to propagate a new generation of butterflies for the next few years. The massive nationwide migration of butterflies is actually only three percent of the eggs laid that became butterflies that have made it to be part of the migration – the rest fall prey to all kinds of predators throughout the year.

What to do when you first witness the migration taking place. Feel free to contact us whenever you do have the opportunity of witnessing this remarkable event. The information you have supplied will help us greatly to see whether the numbers of our migratory butterflies are dwindling or increasing. It also educates us as to which other flight paths they create for the future. Please contact us on info@cbisa.co.za Thank you