In 1950 a butterfly collector called David A Swanepoel gave his experience with this wonderful migrant butterfly. He said: “Collectors up to 1950 chose to remember one of South Africa’s commonest Whites as Pieris mesentina, the name first given it by Cramer in 1782. Those readers who now possess G. van Son’s Butterflies of Southern Africa, part 1, 1949, may desire to follow his choice of Belenois aurote, the name by which Fabricius subsequently – in 1793 – described the species.
So widely does aurota range that we may well ask “where does it not fly?” But there are places where aurota is rather scarce, particularly in the Cape south-western districts and in parts of the Karroo. In the latter area we may even come across places where the species does not fly at all, or perhaps once, many years hewn copious rainfall occurs. Strangest of all is its comparative scarcity in the warmer wooded areas of South Africa, whilst in the cooler grassland it often swarms. (See DA Swanepoel, pic left – 1953)

Every year, nearly, sometimes in December, but more usually in January or February, or even in March, millions, so to speak, of aurota make their way over the grassland of the Orange Free State, Basutoland, Natal and the bushveld of the Transvaal; always keeping in a north-easterly direction. Farmers in general associate these migrations with the caterpillars of certain moths that destroy their mealies, though it is known to entomologists that the larvae of aurota do not feed on mealies at all. 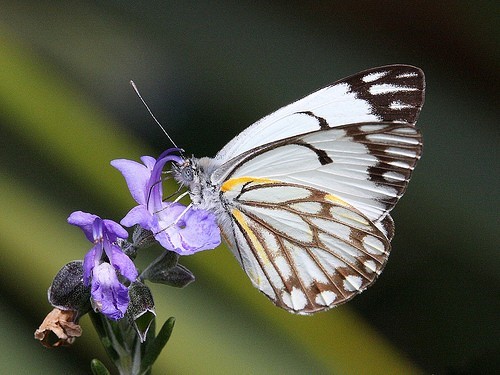 I shall always think of aurota as a carefree happy-go-lucky butterfly, flying over South Africa’s highest mountain, over its deepest gorges, through its densest forests, over its driest sandy wastes, over its most expansive grassveld; feeding here and there on flowers or sucking at muddy patches in the warmer bushveld of the Transvaal; resting wherever it likes; roosting in hundreds on low bushes for the night; flying during the day almost from sunrise to sunset and even crossing vast stretches of ocean. Almost the whole African continent is in its range. Bad weather usually retards aurota’s activity, or brings it to a standstill. (See the male on the right) I often wonder why the species is scarcer in the bushveld of the Transvaal, Natal, and Cape Province when not migrating, whilst in the lucern fields and gardens of the Orange Free State it is plentiful. In January 1948 while travelling form the northern Transvaal southwards through Swaziland to northern Natal, I observed one of aurota’s grandest migrations after nearly two years of severe drought practically throughout South Africa. Not one mile of that 400 mile journey was without aurota, even over the highest grassy peaks of the Wolkberg. In its favourite habitat, the colder areas, aurota flies from about September-October to April-May. In the warmer regions it files throughout the year, differing slightly in the winter brood. The female is slightly scarcer and differs from the male. It flies throughout South Africa”. 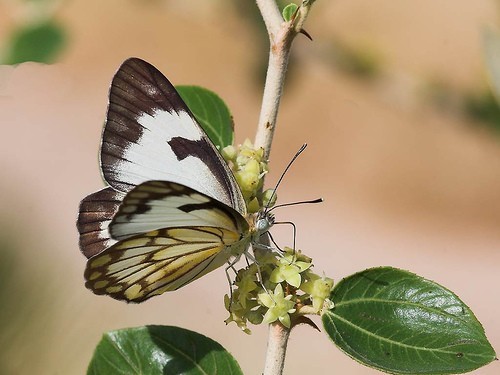 Swanepoel published the first ever butterfly book on South African Butterflies at his own cost. The book is called Butterflies of Southern Africa, published in 1953 in Holland. And in his final words Swanepoel said “In laying down my pen at the end of what has been to me a pleasure able task, I take occasion to dedicate this book to all naturalists and friends, without whose kindness and ungrudging aid it must inevitable have left much to be desired; and to those naturalists who may one day wander over the numerous paths that have afforded me so many happy, unforgettable hours – these would hardly have been possible without the grace of the Creator of all the beautiful forms described in this book. As mentioned in the introduction, this work is by no means complete, and if one day it is revised by some future observer, may he fulfil my dearest wish by building a great entomological castle upon this small foundation stone.” (Epilogue of D.A. Swanepoel’s book, page 316) (See the female above right). These are the words, which have made the challenge, to future collectors, who have the inclination, to pick up the challenge of Mr. D.A. Swanepoel. It is with this challenge, from a great man, that we at Conservation of Butterflies in South Africa, have accepted to carry on the legacy of our South African butterflies, to you and the world.

“A great mans works are never to lie in the dust but are there to be honoured. The teachings of this great work are forever, and will be taught for generations to come”. Quote; E. Whiteley 1973.

What to do when you first witness the migration taking place? Feel free to contact us whenever you do have the opportunity of witnessing this remarkable event. The information you have supplied will help us greatly to see whether the numbers of our migratory butterflies are dwindling or increasing. It also educates us as to which other flight paths they create for the future. Please contact us on info@cbisa@.co.za. Thank you